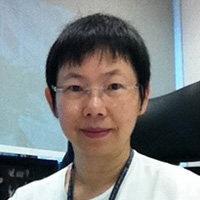 My research focuses on the molecular mechanisms that promote the development and progression of esophageal squamous cell carcinoma (ESCC). We were the first to report that ectopic expression of a helix-loop-helix protein Id1 in cancer cells leads to activation of the phosphatidylinositol-3-kinase (PI3K)/Akt signaling pathway, which is involved in regulating a wide spectrum of cellular functions including proliferation, survival, angiogenesis, invasion and metastasis. We found that this mechanism, which also promotes cancer cell stemness and chemoresistance, is mediated by Id1-induced secretion of insulin-like growth factor 2 (IGF2), which exerts autocrine influence on cancer cells via the insulin-like growth factor 1 receptor (IGF1R). We also found that cancer cell-secreted IGF2 can activate stromal fibroblasts in the tumor microenvironment to secrete vascular endothelial growth factor (VEGF), which in turn instigates VEGF receptor 1 (VEGFR1)-positive bone marrow-derived vascular progenitor cells to promote tumor angiogenesis and metastasis. Taken together, these findings substantiate that the Id1/IGF2/VEGF/VEGFR1 cascade plays a pivotal role in tumor-driven pathological processes during cancer progression. These studies also provide important pre-clinical data to support the use of antibodies against IGF2, VEGF2 and their receptors as a novel approach in esophageal cancer therapy. We also studied the oncogenic role and mechanisms of FBXO31, a member of the F-box protein family, in ESCC. Other recent projects include identification of microRNAs that can reverse chemoresistance and suppress invasion/metastasis of ESCC cells. MicroRNA-377, for example, was found to modulate chemoresistance, and suppress initiation and progression of ESCC by targeting CD133 and VEGF.