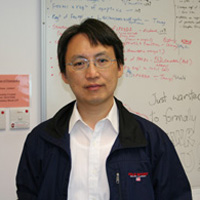 Kwok-Ming Yao is currently Associate Professor in the School of Biomedical Sciences, The University of Hong Kong. He graduated from Brandeis University (Genetics, Molecular and Developmental Biology program) with a PhD degree in 1992.  After postdoctoral training at Dana Farber Cancer Institute and Harvard Medical School (1993-1994) and then Genetics Institute, Inc., Cambridge, MA (1994-1996), he joined the University of Hong Kong as Assistant Professor in 1997 and was promoted to Associate Professor in 2009. He has published more than 40 peer-reviewed articles including papers in Science, Molecular and Cellular Biology, Journal of Biological Chemistry, The EMBO Reports, Journal of Cell Science, Diabetes and Endocrinology.

FOXM1 and regulation of cancer and stem cell function
Dr. Yao cloned FOXM1 when he was a postdoctoral fellow at GeneticsInstitute, Inc. (GI). His lab first demonstrated that FOXM1 over-expressionstimulates cyclin B1 expression and enhances progression through the G2/M phase of the cellcycle. FOXM1 was later shown by Dr. Yao’s lab to be regulated byMAPK signaling, strongly indicating a pivotal role played by FOXM1 in mediating thegrowth promoting effect of mitogens. Further, Dr. Yao and his collaboratorsdiscovered that FOXM1 regulates the transcription of the estrogen receptor a in breast cancercells and is involved in the regulation of cervical cancer progression and themigration/invasion of ovarian cancer cells, and that FoxM1 counteracts oxidative stress-inducedsenescence and stimulates Bmi-1 expression in mouse embryonic fibroblasts. Recently, Dr. Yao’slab presented evidence to support the hypothesis that the b isoform, which is frequentlyover-expressed in cancers, represents a more active form of FOXM1. Most recently, Dr. Yao has initiated collaboration with Prof Y Tan (Hunan U) to investigate the role of FOXM1 in the regulation of genome stability and pluripotency in human embryonic stem cells.

PDZ Domain-containing protein 2 (PDZD2) and regulation of pancreatic b-cell formation
Dr. Yao also cloned PDZD2 as a highly expressed gene in pancreatic beta cells when he was a postdoctoral fellow at GI. PDZD2, with a relative molecular mass of approximately 300 kDa, contains six different PDZ protein–protein interaction domains, which are thought to act as molecular scaffolds to facilitate the assembly of macromolecular complexes. Dr. Yao’s lab demonstrated that PDZD2 is proteolytically cleaved by caspase-3 to generate the secreted protein, sPDZD2. This is analogous to the processing of pro-IL-16 to generate the secreted cytokine, IL-16. Expression of sPDZD2 in pancreas and other tissues suggests an extracellular signaling function for sPDZD2. Dr. Yao and his collaborators showed that sPDZD2 exists at high levels in human fetal pancreas and in pancreatic progenitor cells derived from human fetus. Recent studies revealed that depletion of both the full-length and secreted forms of PDZD2 in rat insulin-secreting INS-1E cells led to dramatic attenuation of mRNA expression of Insulin1, Glut2 and MafA, whereas addition of recombinant sPDZD2 (at 10-10 M) stimulated the expression of these beta-cell genes and the activity of the insulin promoter. Interestingly, depletion of the full-length form (but not the secreted form) of PDZD2 in two gene-trap mutant mouse lines led to increased basal insulin secretion, revealing a novel role for PDZD2 in the regulation of basal insulin secretion probably via modulation of KATP channel activity