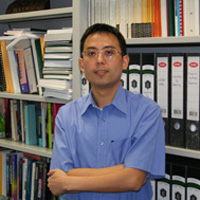 My current research interest is in the understanding of how cellular stress may eventually result in the alteration or loss of cellular functions: an underlying causative factor in chronic diseases. Cellular stress can arise due to various reasons, such as the perturbation/loss of intra- or extracellular homeostasis, the production of toxic metabolites, damages of intracellular macromolecules, etc. Mechanisms exist in cells that are able to sense and to respond to the presence of cellular stress. Such mechanisms are crucial to the health and development of a multi-cellular organism.

Our group is particularly interested in oxidative stress response mechanisms in cells. Oxidative stress is due to the accumulation of reactive oxygen species (ROS). Firstly, we would like to understand how ROS might function as signaling molecules that regulate gene expression at the post-transcriptional level. We demonstrated previously that treatment of cells with a synthetic retinoid known as fenretinide resulted in the expression of the growth-arrest and DNA-damage inducible (Gadd153) gene. Further study of this effect of fenretinide revealed that this retinoid led to the stabilization of the Gadd153 mRNA, most probably through an ROS-dependent mechanism. We are currently investigating the molecular components that are involved in the ROS-mediated regulation of mRNA-stability.

Another topic that is of interest to us is apoptosis: a response option that may be selected by cells in the event of stress. Previously, we obtained evidence that the ?-opioid receptor agonist (U50488H) was a potentiating agent for apoptosis through a pathway that apparently involved the Inositol-1,4,5-trisphosphate/Ca 2+-signaling pathway. We are currently investigating how such a pathway may act as a signaling pathway for apoptotic cell death.