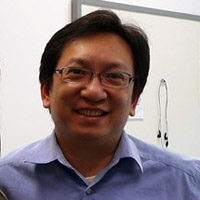 Neuronal cdc2-like kinase (Nclk) has been shown to play an important role in neuronal differentiation, neuro-cytoskeleton dynamics, and neurite extension. Aberrant of Nclk activity has been implicated in a number of neurodegenerative diseases including Alzheimer’s disease and Parkinson’s disease. Nclk consists of a catalytic subunit, called cyclin dependent protein kinase 5 (Cdk5), and a 25 kDa regulatory subunit derived proteolytically from a 35 kDa neuronal-specific protein, called neuronal Cdk5 activator. Although Cdk5 protein exists ubiquitously, Nclk activity can only be found in brain because of the restricted expression of Cdk5 activator. This suggests that the activator is the crucial modulator for the Nclk activity. Thus our current researches focus on the identification of proteins that can interact with Cdk5 activators and can modulate the Cdk5 activity.

The small Rho GTPases family (including RhoA, Cdc42 and Rac1), which belongs to Ras small GTPase superfamily, is involved in a number of cellular processes including gene regulation, cell migration and cell division. Emerging evidences has shown that Rho GTPases also play a vital role in the regulation of neurite outgrowth and cell migration. One of the downstream effectors of Cdc42 and Rac1 is called p21-activated protein kinase (Pak), which contains a highly conserved N-terminal Cdc42/Rac1 binding domain and a C-terminal kinase domain. Six members of Pak kinase family have been identified and they are subdivided into 2 groups. Pak5, which belongs to the group II Pak family, is found to be highly expressed in brain and stimulates neurite outgrowth by downregulation of RhoA. Using the yeast-2 hybrid screening, we have identified several potential cellular partners of Pak5 and would like to further characterize the functional outcome of their interaction. Recently, we also found that group I Pak family member, Pak1, is overexpressed in liver cancer, which is one of the most common cancers worldwide and in Hong Kong. Thus, our researches also focus on the molecular mechanism by which Pak1 induces hepatocarcinogenesis.

Emerging evidence suggests that supernumerary centrosomes drive chromosomal instability and is linked to oncogenesis. Several viral oncoproteins, such as human papillomavirus (HPV) type 16 E6 and E7 and hepatitis B virus X protein (HBx), have been shown to transform cells by promoting centrosome abnormalities and formation of multipolar spindles. Thus it appears that induction of centrosome amplification may be a common strategy for viral-mediated oncogenesis. We have recently characterized a novel cellular centrosomal protein, which we named TAX1BP2 and have shown to play an important role in centrosome duplication. Thus we would like to understand further the molecular signaling of TAX1BP2 and how centrosome overduplication contributes to the development of cancer.