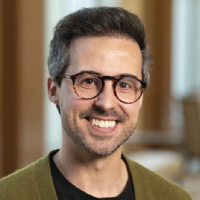 Ruben Hervas Millan is currently an Assistant Professor in the School of Biomedical Sciences at The University of Hong Kong. Ruben received his B.Sc. degree in Biochemistry from the Autonomous University of Madrid, Spain, and his Ph.D. in Molecular Sciences from the Cajal Institute & Autonomous University, after which he undertook postdoctoral training at the Stowers Institute for Medical Research in the United States of America. Following his postdoctoral training, Ruben joined The University of Hong Kong as an Assistant Professor in 2021.

The purpose of our research is to provide new structural and mechanistic information about specific protein assemblies that are linked with memory persistence and animal development.

Proteins are the workhorses in the cell. A given protein function is determined by its three-dimensional structure (fold/shape), which emerges from a complex folding process. Among these folds, amyloids are organized, filamentous protein aggregates commonly linked with pathological conditions, including Alzheimer’s or Parkinson’s disease. Nonetheless, amyloids also play a role in diverse physiological processes across multiple phyla. The knowledge of the principles that drive pathological protein aggregation is growing. However, how amyloids are functional units remains unclear. Partially, this is due to the absence of high-resolution structural data of functional amyloids.

Research in our lab focuses on the structure determination of functional amyloids using an electron microscope operating at cryogenic conditions; a technique called electron-cryo microscopy (cryo-EM). Recently, we have characterized the function and 3D structure of the aggregated state, isolated from the Drosophila brain, of the synaptic protein synthesis regulator CPEB, which across animal species plays a causal role in transforming a short-term memory into a long-lived one. Now, we aim to determine the structure and the biochemical activity of functional amyloids involved in both human memory persistence and animal development. Coupling cryo-EM with orthogonal data, such as in vitro activity tests or animal models to test the consequences of amyloid assembly and disruption, may provide insight into the functional consequences of amyloid formation in vivo and into how organisms regulate amyloid assembly/disassembly to restrict their activity in time and space. In addition, the derived findings may force us to reexamine why and how other amyloids are deleterious, particularly to the human nervous system, and how protein aggregation-based diseases, such as Alzheimer´s, might be treated in the future.

Our structures:
Here, we will summarize the main findings and structures derived from our research: 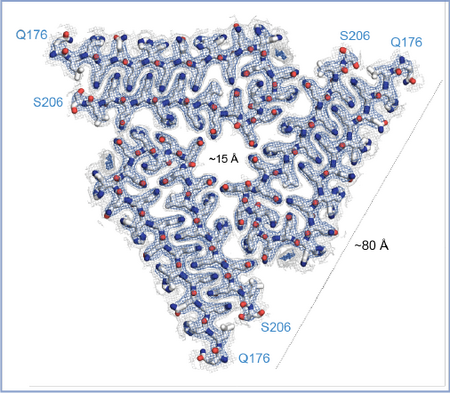 We determined the atomic structure of the biochemically active, aggregated state of CPEB/Orb2 extracted from the Drosophila adult brain. Orb2 aggregates consist of elongated threefold-symmetric amyloid filaments stabilized through a tightly interdigitated glutamine packing. The hydrophilic nature of the Orb2 filament core suggests how the neuronal Orb2 amyloid could act as a stable yet malleable substrate of memory.