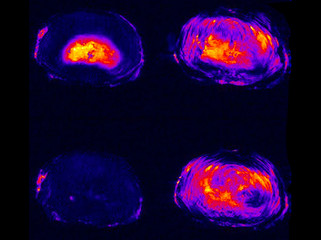 As you bend, your spine shifts. The older you are, the more likely there’s a little stiffness as the vertebrae, the interlocking chunks of bone, realign. Back pain associated with ageing is commonly caused by deterioration of the discs that sit between the bones, protecting the structures and enabling movement. Researchers keen to understand this breakdown looked at the different composition of discs in old and young people, analysing the presence of two protein types: extracellular matrix proteins, which form the scaffold binding cells together, and signalling proteins, which allow cells to communicate. The study found that both the amount and production of these proteins was greater in younger people. It also developed a new tool to analyse the distribution of these proteins with MRI (pictured, with high water content, indicating the protein makeup, yellow), which could help guide new approaches to protecting the discs, and holding back pain.

The backbone of vertebrate animals consists of a series of bones called vertebrae that are joined together by disc-like structures that allow the back to move and distribute forces to protect it during daily activities. It is common for these intervertebral discs to degenerate with age, resulting in back pain and severely reducing quality of life.

The mechanical features of intervertebral discs are the result of their proteins. These include extracellular matrix proteins, which form the external scaffolding that binds cells together in a tissue, and signaling proteins, which allow cells to communicate. However, how the levels of different proteins in each region of the disc vary with time has not been fully examined.

To establish how protein composition changes with age, Tam, Chen et al. quantified the protein levels and gene activity (which leads to protein production) of intervertebral discs from young and old deceased individuals. They found that the position of different mixtures of proteins in the intervertebral disc changes with age, and that young people have high levels of extracellular matrix proteins and signaling proteins. Levels of these proteins decreased as people got older, as did the amount of proteins produced.

To determine which region of the intervertebral disc different proteins were in, Tam, Chen et al. also performed magnetic resonance imaging (MRI) of the samples to correlate image intensity (which represents water content) with the corresponding protein signature. The data obtained provides a high-quality map of how the location of different proteins changes with age, and is available online under the name DIPPER. This database is an informative resource for research into skeletal biology, and it will likely advance the understanding of intervertebral disc degeneration in humans and animals, potentially leading to the development of new treatment strategies for this condition.