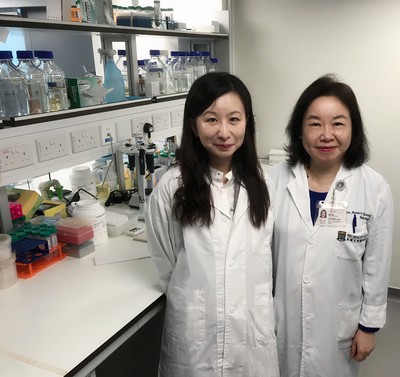 Researchers at the School of Biomedical Sciences and Department of Pathology, LKS Faculty of Medicine at The University of Hong Kong (HKUMed) have discovered a new genetic marker to guide targeted therapy for ovarian cancer patients, a major discovery that could lead to new treatment opportunities for ovarian cancer. The findings are published in Nature Communications, a world's leading multidisciplinary scientific journal. (link to the publication)

Background
Tumour DNA sequence enables doctors to customise treatment for the individual patient based on each patient’s unique genetic makeup. This is called precision medicine in which genetic marker can help predict the effective drug that kills tumour cells. By prescribing the more effective drug, precision medicine may reduce the cost and time of treatment. The side effects of unnecessary drug can also be avoided.

Ovarian cancer is the 7th leading cause of cancer deaths among women in Hong Kong. Based on the latest available data, the incidence and death rates were 15.1 and 5.8 per 100,000 female population, respectively, in 2016. The disease is one of the most challenging cancers to treat. Surgery and chemotherapy are the standard of care. Patients who initially responded can become chemo-resistant and indeed recurrence occurs in 70-80% of late-stage patients, whose 5-year survival rate is less than 30%. Therefore, one of the biggest unmet needs in ovarian cancer care is to develop therapeutic strategies that can tackle this life threatening disease. Currently, there are only a few targeted therapies with linked predictive genetic marker. This study aims to identify novel marker and the corresponding therapies.

Research method and findings
The researchers studied the tumour DNA sequencing data deposited in public databases. Among >1,000 ovarian cancer patients, 70% had deletion of the PIK3R1 gene (also known as PIK3R1 loss). Functional consequences and therapeutic implication of PIK3R1 loss has never been investigated in cancer. The research team employed extensive experiments which showed PIK3R1 loss promotes the growth of ovarian tumours through simultaneous activation of two important signaling pathways: AKT and STAT3. They examined >40 local cases of ovarian cancer and consistently found activation of these two signaling pathways. The activated signaling represents a targetable therapeutic approach for ovarian cancer patients with PIK3R1 gene deletion. Drugs inhibiting these two pathways were tested on cancers with PIK3R1 loss that grew in mice. The team successfully showed that the inhibitors are highly effective to suppress cancer growth. The results also indicated stronger therapeutic benefit when the inhibitors were used in combination compared to single agents alone.