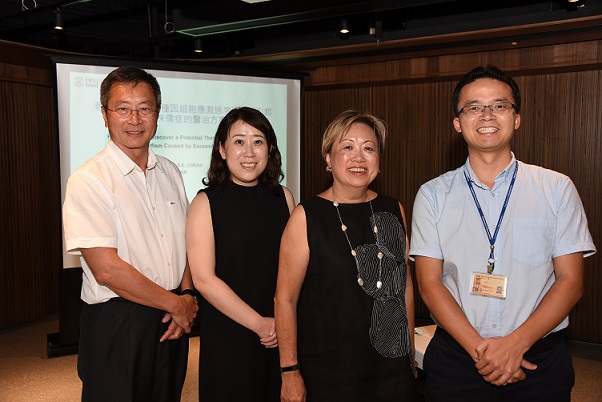 A HKU-led international team of scientists uncover why cellular stress can cause dwarfism and provide a therapeutic lead that can be exploited to develop drugs to treat such bone disorders.

A HKU-led international team of scientists uncover why cellular stress can cause dwarfism and provide a therapeutic lead that can be exploited to develop drugs to treat such bone disorders.  This exciting advance is described in their paper published in the premier life sciences journal, eLife.

There are over 400 types of congenital disorders affecting the development of the bones in the skeleton. Many of these congenital disorders resulting in malformed bones or dwarfism, have been associated with genetic alterations that impair the folding and excretion of proteins from cells.  One such disorder is a type of congenital dwarfism caused by the synthesis of an abnormal form of collagen protein.  When proteins do not fold properly inside cells, a stress response, termed the Integrated Stress Response (ISR) is activated which helps restore normal function. However when the stress cannot be resolved easily, the cells do not function properly and disease results.

To find out why the synthesis of an abnormal form of a collagen protein causes congenital dwarfism, HKU scientists, leading an international research team, generated and studied mouse models of this human disorder. The team found that the underlying cause of the poorer growth of developing bones in this human dwarfism, is activation of the ISR in cartilage cells.  By comparing the genes expressed in normal mice and in mouse mutants carrying the mouse equivalent of the abnormal human gene, they found that the major culprit behind the poorer skeletal growth is the activation of gene regulators called ATF4 and SOX9, which are master controllers of skeletal development and growth.  They reasoned that the likely strategy to prevent the developmental abnormality would be to identify a part of the ISR pathway that could be manipulated to prevent the abnormal expression of these factors.  They treated mutant mice carrying the abnormal collagen protein, with a drug-like molecule called ISRIB, which antagonizes the ISR high enough up in the pathway to prevent the abnormal synthesis of ATF4 and SOX9.  The team found that ISRIB treatment of the mice, without any apparent adverse effects, corrected the dwarfism and malformation of the bones of the treated mice, and they grew to almost 95% of normal size.

The team concluded that targeting the ISR pathway is a possible preventive strategy for skeletal malformation and bone growth deficiency caused by activation of cellular stress.

Human skeletal defects lead to physical disabilities and generate difficulties in education, employment and social life.  Current treatment options in skeletal disorders are extremely limited and may involve controversial surgical procedures such as limb lengthening.  The insights provided by this study, linking triggering stress response in cells and how this causes them to mature improperly, reveal the primary cause of malformed and shortened bones in some congenital dwarfism cases.  By showing that they can prevent the consequential dwarfism by targeting the ISR pathway without other side effects, the team has revealed new potential for future drug development where even some amelioration of dwarfism would have significant impact for patients.  The impact of these findings extend beyond congenital dwarfism disorders but also to non-congenital and common disorders where cellular stress results in the synthesis of abnormal types of proteins or excessive amounts of proteins surrounding cells in tissues (a condition called fibrosis).

Professor Kathy Cheah, Chair Professor of Biochemistry and Jimmy & Emily Tang Professor of Molecular Genetics of HKU School of Biomedical Sciences, who led the study says, “Being a dwarf can have deep psychological and social impact on the affected individual.  I am sure that if, based on our results and deep insights into the disease mechanism, a treatment can be developed that results in even a 10-20% increase in growth/height, that will have enormous impact.”

Professor John Leong Chi-yan, Chairman of the Hospital Authority, commented, “There are many causes and types of short stature.  The type of congenital dwarfism the team studied causes short limbs and bow legs, resulting in a short stature and a waddling gait.  Their findings of a drug like molecule, to prevent the abnormal stress response and rescue the dwarfism in the animal model of the disorder is exciting, opening up the possibility of treatment/prevention of this disease.”

Professor Kenneth Cheung, Head of Department of Orthopaedics and Traumatology at HKU commented, “This study sheds light on the poorly understood pathogenesis of the rare bone disorders that lead to dwarfism.  Importantly it suggests a potential therapeutic strategy and provides hope for sufferers worldwide.”

About the Research Team